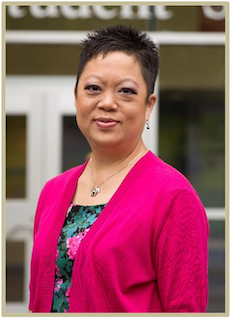 The eldest daughter of Taiwanese immigrants, Luoluo (pronounced “lō-lō”) Hong joined the Georgia Institute of Technology as the inaugural Vice President for Student Engagement & Well-Being on August 1st, 2021. The creation of this inaugural position is a key part of the 2020-2030 Institute Strategic Plan, which identifies Students are our Top Priority as a core Georgia Tech value, and names Expand Access and Cultivate Well-being as two of six strategic focus areas. To advance these mandates, Hong is working to shape and guide the Institute’s collective impact framework for student belonging, engagement, and well-being. She is responsible for developing a comprehensive, coordinated and evidence-based approach for student activities, events, programs, and services that supports student learning and holistic success at Georgia Tech and beyond, as well as promotes educational equity.

To this role, Luoluo brings over 30 years of experience in higher education spanning seven campuses. She has a record of service providing visionary and strategic leadership in administration, enrollment management, public health, student affairs, and JEDI (justice, equity, diversity, and inclusion) efforts. Luoluo came to the Institute from the California State University system where she served first as the Vice President for Student Affairs & Enrollment Management and Title IX Coordinator at San Francisco State University (2014-2019) and then as the Associate Vice Chancellor for Student Affairs & Enrollment Management in the System Office (2019-2021).

At all but one campus where she has worked, Luoluo has taught undergraduate and/or graduate-level courses and been an affiliated faculty member in a variety of disciplines, including Kinesiology, Educational Leadership & Policy Analysis, Psychology, and Criminal Justice & Criminology.  Luoluo was also an Associate Professor of Women’s Studies at ASU and was tenured as an Associate Professor in Public Health Leadership & Education at UH Hilo. As of Fall 2022, Luoluo started teaching a 250-student lecture for APPH 1040: The Scientific Foundations of Health – a course which is required of all Georgia Tech students in order to graduate.

Luoluo holds a BA in Psychology from Amherst College, a Master’s in Public Health from Yale University, and a PhD in Educational Leadership & Research from LSU in Baton Rouge. A nationally sought-after speaker and trainer in the areas of violence prevention, social justice, and leadership, Luoluo has delivered over 3,200 presentations, keynoted over 75 conferences and meetings, and authored several book chapters. Formerly a consulting editor for the Journal of American College Health (2000-2008) and recognized as a Fellow by the American College Health Association in 2006, Luoluo is the faculty coordinator for the American College Personnel Association’s Aspiring SSAO Institute and is a member of the Women’s Network Executive Council for the American Council on Education. She also completed a term as chair for the Pacific West Athletic Conference from 2011-2013.

An alumna member of the Delta Kappa chapter of Kappa Alpha Theta, Luoluo has volunteered with numerous rape crisis centers across the US, as well as with Kiwanis and the Chamber of Commerce of East Hawaiˈi Island. Luoluo is the proud parent of two rambunctious felines: a highly talkative blue point Siamese kitten named Jorah Mormont and a five-year old flame point Siamese mix who loosely answers to Daario Naharis and believes he is a dog. Luoluo can occasionally be found masquerading as a level 60 human warlock in World of Warcraft.